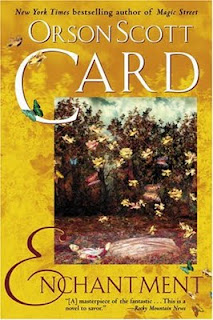 This book was a great read.  Orson Scott Card has some of the snappiest, wittiest, FUNNIEST dialogue I've ever read before.  However, he seems to have a fourteen-year-old boy fascination with bodily functions...*shrug*

Anyway, Enchantment is a retelling of the fairytale Sleeping Beauty.
Here is the premise taken directly from wikipedia:

"The protagonist is Ivan Smetski, a young Ukrainian-American linguist who specializes in Old Church Slavic, a language from 10th-century Russia. In 1992, Ivan returns to his native town of Kiev to pursue additional graduate studies. While there he discovers the body of a woman, apparently sleeping in the woods. He awakens her with a kiss, and she tells him, in Old Church Slavonic, that she is Katerina, a princess of the kingdom of Taina.

"Transported back to the 10th century, Ivan follows Katerina back to Taina where he finds the Christian kingdom terrorized by the traditional Russian Arch-villianess, Baba Yaga."  Together, the two of them have to figure out how to save both of their worlds from the evil and sort of humorous hag.

Enchantment is an adult fairytale, so there is a bit of humor unsuitable for children.  However, the humor is really just a part of the coarse, viking-esque culture that the story takes place in.

There is magic and love and space-time dimension crossing, and mythology threaded throughout, which actually has an extremely cool twist on it.  I highly recommend this book.  It might be one of Card's best.