Planting the Seeds of Cobbogoth 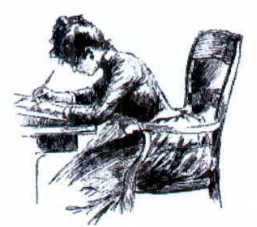 So, my husband suggested I start blogging about what my experience of writing a book has been thus far. And I thought...hmmm...why? Then I started remembering how I felt about writing a book in the beginning, and how much I would've loved to go read the blog of someone who's already been through all the grueling steps I was going through at the time. So here it is, a blog of my good days and bad days writing Cobbogoth.
First of all, I've always known I wanted to be a writer. I knew it even before I could write. When I was little and stories would pop into my head, I remember getting so frustrated because I didn't have the words or the ability to write them down on paper to remember them, so I recorded them onto a cassette tape instead.
As far as Cobbogoth is concerned, I think Norah Lukens and James Riley as well as Uncle Jack have always been living in my head in one form or another. They started manifesting themselves in my stories when I began to really write, which was in about the fourth grade. I've always seemed to have a Norah in my stories, and the love interest was always either Ben or James, and there was always an Uncle Jack. It's funny how characters haunt you like that--like they too are in their developmental stages, and only when you are developed enough to do them justice do they come to you in their complete form.
The actual idea of Cobbogoth, or a city one could only access through a cave was first planted in my mind by my fourth grade teacher, Mrs. Waddingham when she read us The Grey King from The Dark is Rising series by Susan Cooper. Of all the books I remember in my childhood, this one stands out as the most influential in my desire to become a writer. The idea of going into a mountain and there's this whole other secret universe of magic and wars going on between good and evil was just amazing to me.
Now the idea of Cobbogoth that had been germinating in my imagination since 4th grade didn't decide to really sprout up again until 6th grade when I got a job as a paper girl. I know, what does my being a paper girl have to do with writing. But keep reading, it's relevant. One of the roads on my paper route was an uphill, mile long, canyon road...and there were dogs--mean dogs, just in case anyone is wondering. Ehem! Anyway, in the early spring, when the snow was all melted, my mom would stop driving us around to deliver papers in the car, and we'd get out our bikes. As a kid, I used my imagination to get myself through uncomfortable situations...which roughly translated, means I used it A LOT. The paper route was no exception.  However I feel kind of like I owe this particular canyon road at least a mention in reference to Cobbogoth, because some of the foundational elements of the story came from the miles I spent pedaling up and down that dang road. I don't know if it was the endorphins released because of the exercise, or the way the fog always got caught up in the mountains, but it impacted me enough to feel like writing about it today.
The idea of someone passing from that other world into our world and then having to return for some predestined fate took root in my mind during my paper route drugery and I knew that would be the premise of my story. (Of course I didn't know then that Cobbogoth would one day be as clear to me today as it is, I just always knew it would be a fantastic story to create, and that I wanted to be the one to create it first.)
Over the next couple years of my life (very critical and cruel adolescent years) I continued writing, but had a few people I liked and looked up to at the time criticize it in such a way that by the time I was 14 I believed I had no business writing stories
It wasn't until my Junior year of high school that Cobbogoth crept up in my life again. I was assigned to write a short story in my English class. The story was called Galcobugoth, and it was about a girl who sits down to do a homework assignment of writing a story, just like I was, and ends up falling asleep. She wakes up to find that she's inside her own story and if she doesn't finish the story, not only will her characters take matters into their own hands, but she'll never get home to hand in her assignment. That particular title stuck with me and seven years later became the inspiration for Cobbogoth. My husband convinced me to drop the "Gal" and I changed the spelling.


But when I entered my senior year of high school, I enrolled in an AP English class and instantly fell in love with essay writing. My teacher, Ms. Beckwith was one of the most difficult teachers I'd ever taken, and I loved every minute of it. It was in her class that the insecurities I'd picked up in my adolescence about my writing fell away, and I discovered I had the potential to go on to college and pursue a degree in English.
It wasn't until my Sophomore year of college that Cobbogoth showed it's face again. It was just after I'd seen the first Lord of the Rings movie and fell completely in love with the world. I decided it was time to invest the knowledge I was gaining in college into my life long dream of wanting to be a fiction writer.
Well, that night, I went home and began writing down everything I could think of: character names, their stories, drawing maps etc, etc, etc. But once again, life got in the way, and my education, job and, of course, social life demanded all of my time. By then I did know my main character would be named Norah (she was named after the fabulous Norah Jones, who I'd just become a huge fan of at the time, and JeriAnn Lukens who was my best friend growing up). I also knew that my hero would be named James. Uncle Jack wasn't too far behind.
So, Cobbogoth didn't really start to grow and become an actual project until 2006 when my son was born. Because of the nature of his birth, which was immensely stressful, I needed something to escape to besides television (I was way too sick of reading, having just finished my degree in English/Lit) in order to survive the stress and worry a premature birth can cause. This is when Cobbogoth became more than just sprouting seeds. This is when it turned into a foundation for an actual world.
Over the next two years, I started mapping out an Epic adventure that has changed over and over and over until I finally found the right way to tell Norah's story. The foundational concept has remained the same, it's just he minor details that have changed.

During this time I learned how to write a book, ans have probably typed at least 2,000 pages.  I've gone through six different drafts of the story, and have two large file boxes packed full of notes on anything from my characters to the flora in Cobbogoth to outlines for additional books.

In 2008 I joined a fantastic writer's group called Imprint, and that is when my writing really started to improve.  If you are serious about becoming a published author, I can't recommend anything that will help you more than finding a good writing group.  Not only is it a great way to hone your craft, but it's also a great way to network and establish a support system--which is vital once you start sending out query letters.

Anyway, I think I've said enough for now. But if anyone has any questions, I can post what little I know from my own experience.  Thanks for reading!
Posted by Hannah L. Clark at 9:50 AM