Well Folks, the day has finally come!  I've been dying to show it to you for months, and now I finally can.  So without further ado, I give you Book 2's beautiful cover, designed by Jenny at Seedlings Design Studio.  She was incredible to work with and her final design far exceeded my expectations.  I love, love, LOVE it!!! 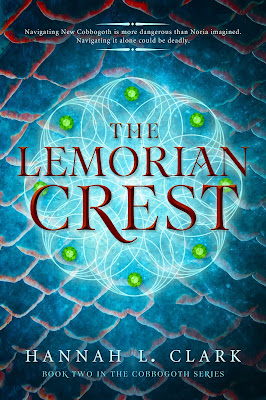 After being raised from infancy in Boston, Mass., Noria (a.k.a Norah Lukens) has no idea what to expect upon entering New Cobbogoth, where she never would have guessed that paths of light can make you vanish; doors can lead to realms both near and far; myths and legends are actual history; a mere kiss can seal two souls as one; and, of course, a stone is never “just a stone.” Her Uncle Jack’s stories never could have prepared her for the magical and dangerous place her native realm is turning out to be.

When the Gihara’s promises begin to crumble, her best friend and soul-mate Jamus (a.k.a. James Riley) is in more danger than ever. Then when his father Lylend abandons her to search for an ancient relic called The Lemorian Crest and she is taken captive by the very people she’s risked everything to save, Noria begins to lose faith in the Cobbogothian gods and the mission they sent her home to accomplish.

Only when a series of new friendships and loyalties are forged in the most peculiar of places, does Noria dare hope again. Hope for Jamus’ safety, for their future together, and for the survival of the entire Cobbogothian race.

The Lemorian Crest is going to be available soon!  To celebrate today's cover reveal, I'm giving away four signed copies of Uncovering Cobbogoth!  Hope you'll enter the giveaway and help me spread the word!  :-)

Oh!  And be sure to stay tuned for next weeks trailer reveal as well as other updates.  I can't wait for you to read the second installment of Norah's journey!