So this week has been a busy one for myself and Uncovering Cobbogoth.  We had three Costco book signings, and while Thursday and Friday were a little slow, my signing today once again rekindled my faith in the rising generation.  Not that I was doubting them before, but let's face it, a lot less kids like to read since technology took over and stated ruling the world. :-)  But you guys, I met so many fantastic kids in South Ogden today!  They were eager and bright-eyed and so excited about the prospect of entering a brand new literary world.  It was so fun, and while I still get super nervous right before book signings, it doesn't take long before I'm swept away and put at ease by the kindness and enthusiasm of strangers.

I wish I'd taken some pics at today's signing, but it's really hard to take pictures of yourself and fans, while you're signing books.  I did, however, want to show you this super cool thing I've been doing, because the kids and parents have Oooo'd and Ahhh'd over it, so it's a real crowd pleaser.

But, alas, it requires an bit of back story.

So when I was really in the trenches of creating the Cobbogoth world, I forced myself to get down on the nitty-gritty of this ancient society I'd been hanging in for, like, over half a decade.  I got so close and personal with them, in fact, that I started to work out what I wanted the characters of their written language to look like.  And so, in the midst of all this, I thought to myself, "self, what if you had your very own Cobbogothian signature that you could use at book signings, if you ever get there?" And my self replied "What do you mean if? What kind of positive thinking is that?" :-)  (But honestly, there were moments that myself and I argued quite heatedly about whether or not Cobbogoth would ever make it's debut in the world! Eight years is a really long time.)

So anyway, earlier this summer, after my first couple signings, I had one of those surreal moments of actualization where I realized I was actually doing the thing I'd been dreaming of doing for much longer than it took me to write Uncovering Cobbogoth.  That's when I remembered my idea and started working out my very own genuine Cobbogothian signature.

This is what I finally came up with: 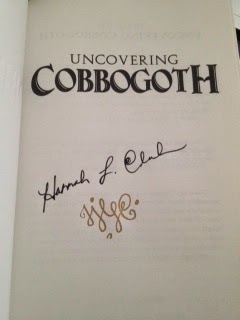 Pretty cool, huh?  Of course the black signature is my actual signature, but I think my Cobbogothian signature turned out very . . . Cobbogothian, if I do say so.  But I'm actually the only one who would really know, right? :-)

Anyway, the kids dig it, and I quite like it myself. I've decided I'm going to fine-tune the entire Cobbogothian alphabet, so that fans can get on my website and figure out their own Cobbogothian signature.  I'll be sure to let you all know when I get it finished.

Before I go, a HUGE shout out to the extremely nice and seriously cool people who work at Costco!  I'm not kidding, you have all been the nicest, and Scott, Michele, Diane, and Darlene (The Flower Lady) at the Sandy Costco, you guys made me want to hang out there all of the time.  :-)