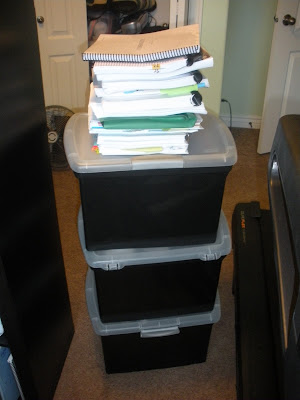 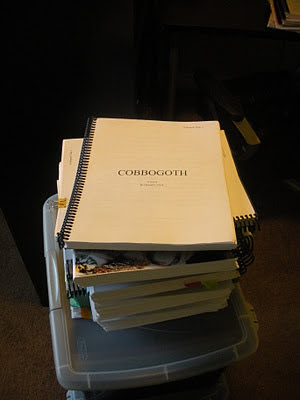 Yep.  Those are 12 different drafts and three full file boxes of notes and outlines and drawings and critiqued manuscripts and anything you can possibly think of that might contribute to building a world and writing a novel.  And yes, I have a bit of the anal OCD in me for hanging on to all of this stuff.
But, before you give up all your hopes and dreams of becoming a writer, let me tell you that I've been working on this book, as well as the outlines for the rest of the Cobbogoth series for five years (those boxes aren't just full of notes for Book 1).  You'd be surprised how many notes you can accumulate over five years--especially if you're too afraid to throw anything away on account of a very bad memory.
Not everyone sets out to write a seven book series on the first go, either.  But, I will say this, which may apply to you, it took me six--yep, that's right, six--very different drafts of Cobbogoth to hone my craft and come up with the right version of the story--the version I have now.  And believe me from the first draft to the 6th draft there is a drastic difference in everything from voice to character development to pacing to plot and so on.  For example, my first finished draft of Cobbogoth (I attempted several before I actually finished one) was over 600 pages long and  I had so much going on in there it could've been broken up into three very different stories.  But finishing a draft from beginning to end was a huge accomplishment in and of itself, and with each draft I learned a critical skill about storytelling and something new about my world.  I have yet to feel like I wasted a single minute toiling over this book and it's many drafts.
Now, after you read this post and see these pics, you may think I must be a little shaky in the upstairs, and I'll admit, I felt that way at times, but writing six different books before finally feeling good enough about my work to publish it isn't unique to me alone.
I've heard this story on various occasions--through the great-vine--so you can take it for what it's worth, although I've found it to be true for myself:  Brandon Sanderson (author of Elantris and the Mistborn Series) was at a writing conference talking with the legendary Orson Scott Card (Ender's Game) and Dave Wolverton (The Runelords.)  He told them about his aspirations to become a published author, and he asked the two men for some advice on accomplishing this goal. They both told him that, if he was really serious about becoming a published author, he should write six novels, put them in a drawer and forget about them, and then he'd have the skills necessary to write a novel worth publishing.  Well, Brandon Sanderson did just that, and his 6th or 7th attempt turned out to be the very fine, finished product called Elantris, which is an extraordinary novel, I might say and actually gave him his big start.
You may read this and think, "man, all that work? It's just totally not worth it!" And you'd be right.  If you don't love writing as much as you love breathing, it most certainly isn't worth it.  However, once a story gets under your skin and into your blood and curls up deep inside your soul to incubate, you'll do anything to get it out on paper in just the right way for the rest of the world to love and enjoy.  And coming from someone who's been on both sides of the fence, I can tell you that there are few things more satisfying than knowing you've put in the work necessary to do that soul-deep story the justice it deserves.
So hang in there, my friends.  If I can do this, then you most certainly can.