Newsie Tuesdie and a Tip

Well, we are still on schedule for October!  I have completed my last wave of content edits, and am about to pass my manuscript off to the editor who will be the last to touch it before it goes to print!  I know, October is coming so fast, and I am extremely excited!  Right now I am testing COBBOGOTH  out on a group of lovely YA readers who will tell me what they think.  My most recent editor thought this would be a good idea before really going for it, and as with all of her suggestions while editing my book, she is right.  If the YA group likes it--hopefully loves it--then I think I'm in good shape!

As for a tip this week, I've decided to post about one of the best writing books I've read.  The book is called Becoming a Writer by Dorthea Brande.  Seriously, this book was truly the best thing I could've read at the beginning of the writing process. 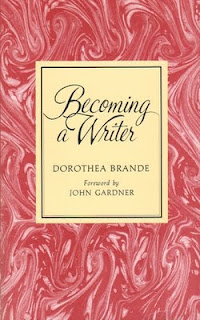 Brande helped me to see that there isn't much about writing that is based on talent, and for someone who has struggled with dyslexia her entire life, this was stupendous news!   Brande says that 100% of writing technique can be learned with hard work and practice.  I think, because all we see is the finished product at the end of the writing process, it's easy to think that the whole thing came about simply by magic, but in actuality, writing a book is just like anything else in life; it can only be accomplished one step at a time.  Some have a bit of talent to help along, but even for them, it requires hard work, perseverance, and a willingness to continually learn and sharpen new skills.

Brande was also the first to introduce me to the two parts of a writer's mind.  She says that these two parts need to be kept separate for maximum effectiveness.  Let me explain: each writer has a "creative side" and an "editorial side."  When the creative side is working, the editorial side should be shut down, because the editorial side of our minds kills the flow of creativity.  Up to that point I was having the hardest time moving forward, because I felt like I had to have a perfect chapter before I could start work on the next one.  When I read Brande's book, and realized my problem was that these two parts of my writer-self were getting in the way of each other, everything really started to pick up.  Like my friend Sarah says, and perhaps I've quoted her here before: "Your writing has to be bad before it can be good," and I have found that to be absolutely right.

Anyway, if you're serious about writing, this is a fantastic and short read written by an author who really makes you feel like she's cheering for you!  I love people like that!